Why Is My Plant Called Harry Lauder’s Walking Stick? 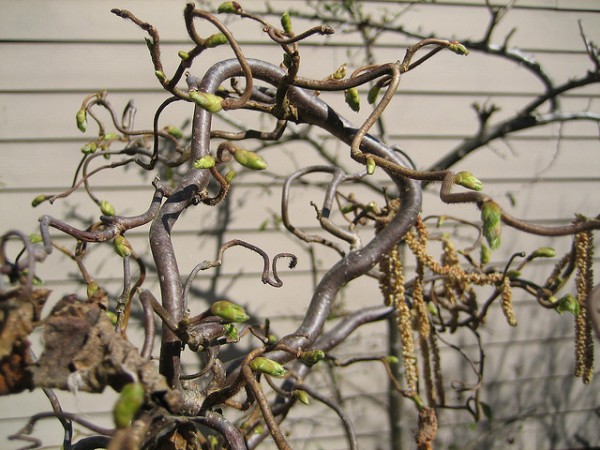 If you have this curious-looking, wonderfully whimsical shrub growing in your yard, you know how unique a landscape feature it is.  It is a deciduous shrub that grows 8 to 10 feet tall and about 8 feet wide, and its dominant feature is its contorted, twisting branches.  Regardless of the season, these branches catch your attention, and not in a grotesque way.  The plant has character and you could even say it has an uncommon grace about its place in the garden.

Harry Lauder’s Walking Stick (botanical name Corylus avallena ‘Contorta’) is a filbert or hazelnut tree that started out as an unusually weird twisted branch that someone noticed growing out of filbert hedge in England.  Filberts make excellent hedges, as well as provide delicious nuts for eating.  Our plant, however, does not produce any nuts from its trailing flowers, called catkins.

The common name of this plant is an interesting story, since almost no one seems to recall the person for whose walking stick this plant is named.  Sir Harry Lauder was an internationally famous entertainer during the early part of the 20th Century.  You could call him a “song and dance man”, but that wouldn’t come close to describing what this man accomplished in this life.  His fame came from singing Scottish ballads on stages throughout Great Britain, which endeared him to his public here and abroad.  Sir Winston Churchill referred to him as “Scotland’s greatest ever ambassador.”

The walking stick name for our unusual shrub was in reference to one of Harry Lauder’s most recognized companions on the stage.  Always appearing in public in traditional Scottish dress, he also carried a very distinctive walking stick.  It was bent, twisted and contorted from the handle down to the tip.  So when it came time to name this twisted selection of filbert, the walking stick of this great entertainer came to mind.