With Homestead’s Perennial Affair coming up soon – June 11 and 12 – I can’t stop showing off my favorites.   Here are three more that can really take the heat and drought.

Amsonia in May (L) and all summer (R)

Amsonia hubrichtii is one of the showiest American plants for the garden, so its increasing popularity is no surprise.  Especially in masses, Amsonia is eye-popping and traffic-stopping – judging by the pedestrians stopping to admire the mass shown above in a neighbor’s front yard.  It looks lovely all summer and then knocks your socks off again in the fall (photo below taken at the Scott Arboretum in November).

It’s native to the rocky outcrops of Arkansas and Oklahoma, is hardy down to Zone 3 (much colder than here in Maryland), grows to about 2.5 feet tall and wide, and blooms best in full sun but will still bloom with less than that.

Amsonia (which has a common name that nobody uses – Willow Blue Star) requires almost no care.  Once established, it’s very drought-tolerant.   Sources suggest cutting it back to 6-8 inches after the blooms fade to make it it bushier and prevent flopping, though I like the floppy look myself.   It can be divided every few years if desired, but bring a sharp saw for the job because its root mass is surprisingly woody and difficult to cut through. 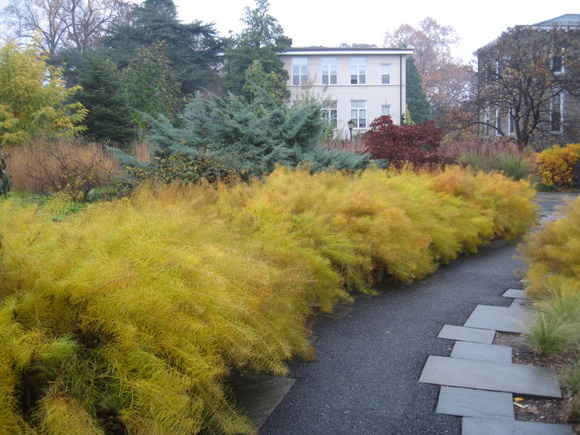 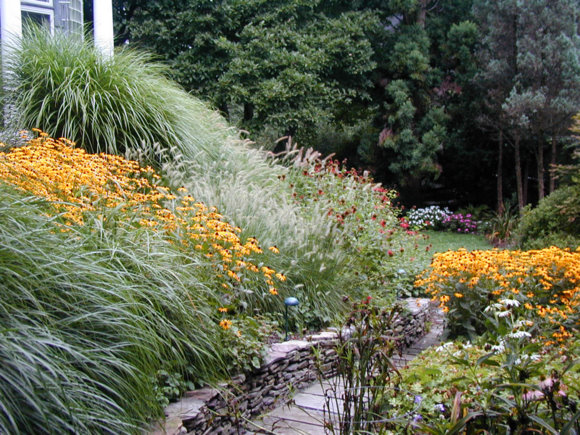 Rudbeckia or Black-Eyed Susan is Maryland’s state flower, so we’d love it even if it weren’t so tough and beautiful.   I love it in masses or drifts, like in the photo above with grasses and the seedheads of Monarda.  That’s the popular variety ‘Goldstrum,’ voted Perennial of the year in 1999.

The species is native to the Southern and Eastern U.S. and again very hardy – down to Zone 3.  It has an incredibly long bloom period, from July into September, and spreads freely by seedlings.  It performs best in full sun but in my experience it blooms plenty with just a half day of sun.

Care of Rudbeckia is negligible after it’s established but be warned: it doesn’t like to be moved!  So if you’re digging up and moving seedlings, do it when it’s cool and cloudy, then water every day until the roots have taken hold.  Most gardeners leave the attractive seedheads standing all winter for the birds; others remove the dead flowers to prevent spreading.   Rudbeckia requires no division.  Sources suggest that pinching in May can produce bushier, shorter plants, but I’ve never done it myself – the variety ‘Goldstrum’ is short enough to not need pinching. 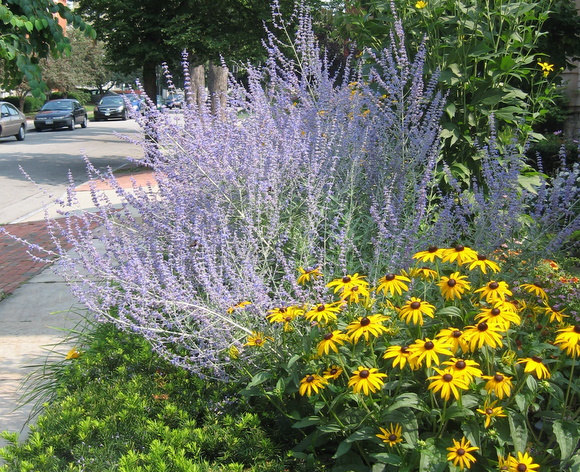 Russian sage (Perovskia) was chosen as Perennial of the Year in 1995 because it performs so well in so much of the country.  It takes at year or more to become established, though, so don’t give up on it before it struts its stuff.  It’ll grow to 3-4 feet tall and needs plenty of sun.

Care of Russian sage is easy – just shorten the stems to about 6 inches in height in early spring.   As we’d expect for a plant from Pakistan and Afghanistan (not Russian after all), it’s very drought-tolerant.  It’s recommended that Russian sage be pinched or cut back by one-half when it reaches 1 foot to produce more branches and general bushiness, but I haven’t tried this myself yet.   No need to divide them and they probably wouldn’t like it, anyway.