With major spring projects coming up soon, it’s a good time to bring up the rarely mentioned but extremely common problem known to all passionate gardeners:  How to haul stuff.  And you know what stuff – the plants, the manure, the bags of potting soil, plus all the related hardware and lumber for building raised beds and more.   I recently posed that question on the national blog GardenRant, with a story titled asked “Gardeners, are your cars filthy from hauling stuff?” and it attracted a nice haul of comments – 84 from across the U.S. and abroad.  Great comments.

In that blog story I confessed to having a perennially filthy car myself – a 15-year-old Honda CRV, which recently died quite suddenly on the Capital Beltway!  The upshot is that I bought a brand new, spanking clean CRV and asked how I could avoid it quickly becoming an embarrassment like my last car was.  That’s my new CRV shown above, loaded up for its first mulch run.

Gardener Answers to the Filthiness Question

I wasn’t surprised to hear from many readers that their cars, too, were always filthy, though many make some effort at cleaning occasionally, or avoiding filth with the use of drop cloths, tarps, and something I’d never heard of but am investigating: cargo liners.  (One brand is WeatherTech, which molds them specifically for each make of car.)

Some of the responses are just fun:

“Wait – there are people with clean cars?”

“My father once suggested that I plant directly in the trunk. His car, of course, is immaculate.”

“The great part about having a filthy car is that no one ever wants to borrow it.”

Readers seemed eager to contribute their own favorite mode of transportation for assorted stuff, and though 27 different makes and models were mentioned, there were some noticeable trends.

Like trucks!  “I’m amazed at all the gardeners that don’t have trucks! I sold my Toyota Tacoma a month ago and I miss it like crazy already. You can just hose out any mess that is left behind in the bed of the truck. Plus, if you want to buy a tree, you don’t have to worry about how tall it is and whether you can squeeze it in back.”  And another: “Ya’ll must live in other parts of the country. We all have pick ups.”

One landscape designer wrote that she’d been “driving a Toyota truck for the past 30 years. The last 2 trucks have had extra cabin seats so I can seat 5 people in the truck if need be.  A small size Toyota truck can fit 80 one gallon size containers.”  And she’s not the only one who can cite exactly how many one-gallon containers they can carry, though that was the highest number.

And this commenter wins for driving the oldest surviving vehicle: “a 1950 Dodge pickup I bought over 30 years ago from a junk yard. 3 engines, 2 paint jobs, and it still gets the job done.”  Seriously?  1950?

And trailers!  One reader had lived in Australia, where gas is much more expensive, and noticed that everyone drove sedans with 2-wheel utility trailers.  “No dirt in your vehicle and you only pay for hauling the extra weight around when you actually need it. I’ve never understood why trailers aren’t more popular in the USA.”  Several readers swear by their 4 x 8 utility trailers.

Among cars and SUVs, the hands-down most popular vehicle is the Subaru Forest, with seven happy customers reporting in and 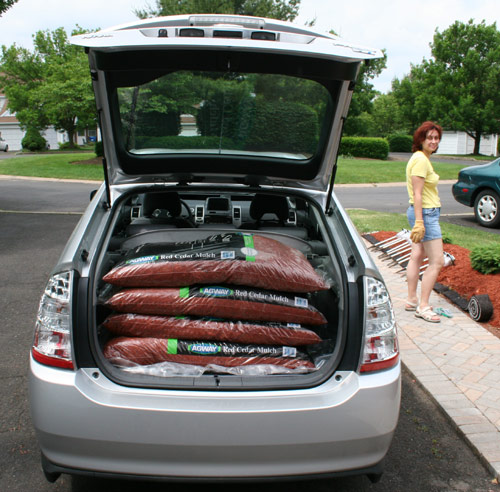 one calling it the “official car of biologists” – for field work – and one of the beloved Foresters had just passed 222,222 miles “and it is so filthy”!  Several recommended their station wagons, and one surprise was that several claim great cargo space in their Prius.  “You’d be amazed what can fit in a second-generation Prius. I haul plants, soil amendments, lumber, tile, concrete mix, you name it.”  Who knew?   This photo from a blog about environmentally friendly driving proves the point.

The Honda Element was perfect for hauling dirty loads, with its plastic interior that could be easily hosed down.  Two commenters even claim great hauling capacity in their Honda Fit, which they claim deserves that name, despite its size.

One of my favorite responses tells this story:  “Saturday I saw a guy loading bags of chicken manure into his silver Aston-Martin DB9, which starts at $170,000 for the bare-bones model. He did not have the bare-bones model, and he was already married.”

Finally, a super-green, diehard gardener in San Francisco has no car, but hauls everything on the local bus system.  And another hauls what he can on his bicycle.  To them I say “Kudos, and better you than me!