Landscapers will tell you that odd numbers are more pleasing to the eye. So remember to pick three. Any combination of Heuchera, Hosta, Fern or Carex will give you an endless variety of texture and color.

Also known as coral bells, Heuchera are native to North America. They vary from forms only several inches high to forms over two and a half feet tall. Most cultivars produce dainty flowers arranged along several tall inflorescences, creating a wispy flowering effect. All of the pink and red flowered Heuchera are great nectar sources and are frequently visited by hummingbirds. Foliage can be seen from chartreuse, dark green, silver, purple, caramel and bronze to almost black. 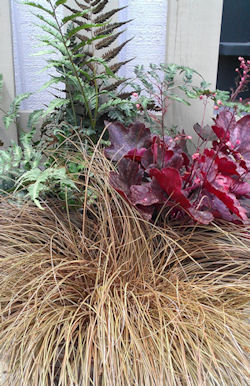 Known mainly for their beautiful foliage, Hostas are extremely popular. Leaves come in a wide range of shapes, sizes colors and textures. Leaves may be solid in color or variegated in different combinations of blue, green, white, and gold. Miniature Hostas are only a few inches in diameter while some cultivars reach six to eight feet around. All hostas bloom in summer with spikes of lavender to white, lily-like flowers, which can be quite showy.

Ferns have been around for more than 300 million years and grow in many different habitats throughout the world. They can provide height and movement as well as texture and color. Ferns add a delicate and airy feeling to containers and the landscape. While most ferns average between one and three feet tall and wide, some, like royal and ostrich ferns, can tower to six feet.

Technically a sedge and not a grass, Carex can be used much like small ornamental grasses. Carex form arching clumps or upright tufts of grass-like foliage which come in a range of colors from greens, blues, yellows, browns, oranges and some striking variegations. Unlike grasses, carex are grown for their foliage and not their blooms.