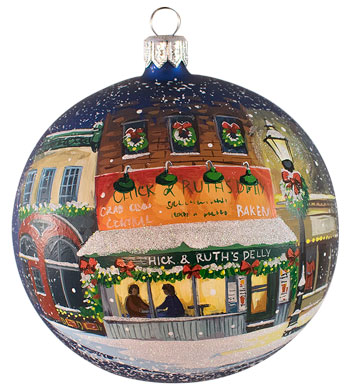 The History of our Painted Heirloom Ornaments

All heirlooms are singularly unique and evoke cherished memories over time. They attach themselves to a family history and become a part of who we are. But in an age when big box retailers, mass merchants, internet shopping, and catalogs are the norm, it is now a rarity to find that one-of-a-kind keepsake.

In 2005, Homestead Gardens introduced exquisite ornaments depicting downtown Annapolis, which were hand-painted in Russia based on our designs. Due to popular demand, we have created additional regional scenes every year since. Each of these limited edition ornaments are hand numbered and are quickly becoming collectible heirlooms.

We hope you enjoy our Christmas display and take home a hand-painted ornament to add to your own heirloom collection.

The History of Chick and Ruth’s Delly

Chick and Ruth Levitt moved from Baltimore to Annapolis with their three children in August of 1965. In taking over a sandwich shop on Main Street, Chick was to institute something that had diminished over the years. Most people had forgotten and young people have never known the “Ma & Pa” establishments.This “unique” delicatessen not only serves quantities of quality food but also quantities of genuine friendship that have lasted through the years. This is due to Chick’s love for people, concern for people, and interest in people. During the Legislative Session, you can find many of our most popular and successful lawmakers enjoying the many combinations on the menu. During the boating season, Chick and Ruth have hosted some of the finest sailors in the world. But spend an afternoon, any day of the year at the “Delly”, and you will find the “Regulars”. Some of these men and women literally “grew up” in Chick and Ruth’s. They started bringing their offspring into the “Delly”. All three of the Levitt children had their share of waiting tables, answering the phone, washing dishes, and even driving to Baltimore for bagels. Ted, at nine years old, was probably the youngest counterman on record. But, with a little ingenuity, a strong milk carton to stand on, and white shirt and black tie, Ted grew. And through the years, his respect for the restaurant and friendships with the customers also grew. In January 1981, Ted’s wife, Beth, joined the Delly family and while working and raising their two children, Scott and Lauren, she is helping the family tradition lives on.Ruth passed away June 20, 1986, from cancer. In 1988, the Scotlaur Inn was opened above the Delly. Chick passed away January 22, 1995. Chick is now back with his wife & girlfriend, Ruth. The memories and traditions of Chick and Ruth live on with Ted & Beth. They wish to thank their friends for their patronage in the past. They hope to continue to serve their usual fare of wholesome food, friendship, and lodging in the future.