Have I mentioned that after decades in one (oversized) garden, I’m starting over in a much smaller garden?  That was actually the reason for my move.  And boy, have I been glad during this recent drought to no longer have to water that oversized garden, which used to take about 10 moves of the sprinkler to water.  That’s a whole day!  Now I can hand-water my plants in about 30 minutes – yay!  Though honestly, I hope to have two or three times as many plants out there this time next year.  Patience is required, but sadly it’s in short order.

So here’s a shot of my back yard, which previously was all lawn with a few azaleas.  This perspective shows off the new 11 x 17-foot porch that I practically LIVE in to escape the bugs, but it also demonstrates today’s new-garden challenge – empty space and lots of it! I haven’t been able to plant here until a couple of weeks ago, when the porch and patio construction were finally done.  So I can finally plant things, but with these crazy-hot temperatures, I’ll probably plan, scheme and buy like crazy after Labor Day. 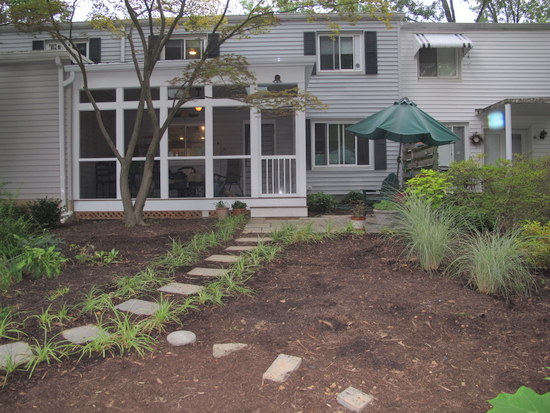 The next photo is of the front yard, which I was able to start filling up a couple of months ago, right after the patio was installed.  Like the back yard, this space used to be all lawn with a few azaleas along the foundation, which faces the northwest. 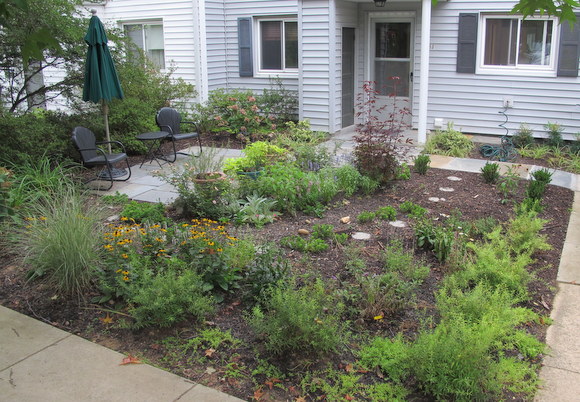 So there are many challenges of creating a new garden, but the first one I’ll address is filling the void – because bare ground or even mulch-covered ground isn’t anyone’s idea of pretty.  And because my old garden was really old – 26 years in the making – I’m used to seeing fullness, lushness, masses of color – the works!

The usual method of dealing with bare ground is, of course, to plant grass seed, assuming there’s enough sun for it to thrive.  And at least in the front yard I could have done that but for such a small space I don’t want to have to do lawn care – it’s as simple as that.  Plus, though the amount of empty space seems daunting now, it won’t be long before I’ll be glad I have at least this much room for the the shrubs and perennials I love.


The good advice always given to creators of new gardens is to first focus on what’s called the “bones” or structure of the garden – the large pieces that make such a difference, even though individually they may not thrill us.  Think evergreen foundation plants – soooo important, yet so easy to overlook.  So I did manage to decide on a few of them and get them in the ground before it got too awfully hot – some boxwoods, Nandinas, Osmanthus, hollies, Japanese cedars and some shrubs that create bones AND pop – the chartreuse-colored Spireas you see in the foreground above.  Love them!

Because these are plants that take some time to do what we want them to do – get big enough to have an impact – it’s best to plant them as soon as possible.

The other type of bone or garden structure that’s best to install right away is, of course, the hardscape, whether it’s flagstone patios like mine or decks and garden structure.   I wanted seating areas in both the front and back gardens and sure, could have saved money by using wood chips under the chairs and umbrellas, but I bit the bullet and paid for flagstone.  It’s forever, and to my eyes, so beautiful.  In my new garden I’m treating myself to some features, like flagstone, that I’d coveted for decades.  (My credo being “It’s now or never!”)

While I had to actually pay for all those shrubs, there were some freebies available to me in the plant category of perennials.  To fill up space in a hurry I managed to beg some extra Black-eyed Susans from a friend, and they’ll continue to reproduce for me, self-seeding around freely.  Love that!  They’re even native to our region – the Maryland state flower, in fact.  Purple coneflowers are another great native plant that self-seeds freely and though I couldn’t find any give-aways, I bought a few and know that they’ll settle in here soon and start a big family, with their many offspring attracting butterflies and in the fall, goldfinches.

Free plants also come from the self-seeding of annuals, so I bought as many of them as I could find, particularly the Alyssum, Cleome, and annual Salvias. 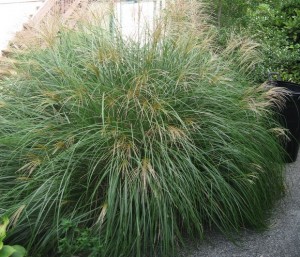 Then there are the big sprawling plants that take up lots of space – like the Miscanthus you see here.  I brought three of them from my old garden and boy, am I glad I did.  Even in the winter, most grasses look great in our climate, and are close to maintenance-free, requiring only a yearly cutting back in March, and watering only when new or during severe droughts.

My other favorite go-to plant for filling up space are Hydrangeas, almost any Hydrangea.  So already in my garden I have one old-fashioned mophead type, two oakleaf types, three new PeeGee types and six new lacecaps.  If you’re thinking that’s too many in such a small garden, I’ve thought of that, too and I may end up gifting away some of them.  But for now, I’m cheering them on and enjoying the instant filler they create.