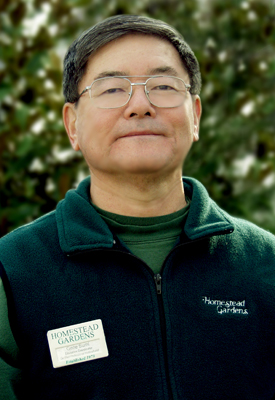 it rains too much to controlling the grubs underneath of your lawn. He manages all educational programs offered by Homestead Gardens for both customers and staff, including garden seminars and workshops, on and off the nursery premises, and group tours at Homestead Gardens. He also oversees the Golden Spades, a gardening group of for senior gardeners that meets on the 1st Tuesday of each month at 10:00 am at Homestead Gardens.

Gene grew up in a gardening environment. In fact, it was the family business. He started working at an early age in his father’s landscape maintenance business in Garden Grove, CA. After graduating from high school in 1963, he got his first job as a seasonal nurseryman to pay his way through college. At L&M Nursery stores in Costa Mesa and Anaheim, CA he worked in every area of the nursery, not only with plants, but as a cashier, and a deliveryman.

After graduating from Chapman College in 1967, he enlisted in the U.S. Army and received a commission as a second lieutenant in the Corps of Engineers through Officer Candidate School. In 1972, he transferred to the Signal Corps and received a commission in the Regular Army in 1982. His many assignments gave him the opportunity to garden in many interesting places in the world, including South Korea and Germany.

After his retirement in the rank of major in 1989, Gene went to work in the defense electronics industry as a purchasing manager. In 1993, he accepted a horticultural sales position at the Behnke Nurseries Company in Beltsville, MD. He started in the Woody Plants department and later became the nurseries’ Customer Service Manager. In 1996, he assumed the duties of Staff Horticulturist, which allowed him to provide helpful gardening information to customers, train nursery staff in retail nursery skills and offer programs in horticulture subjects. Gene joined the staff of Homestead Gardens in the spring of 2002, as its Garden Horticulturist.  Although he still retains many of his horticulturist duties, Gene was appointed Education Coordinator in August, 2004.

In addition to his BA in History, Gene holds a MA in Psychology from The Catholic University of America. He is a Maryland Certified Professional Horticulturist and is an adjunct instructor in Horticulture in the Continuing Education Division of Prince George’s Community College.